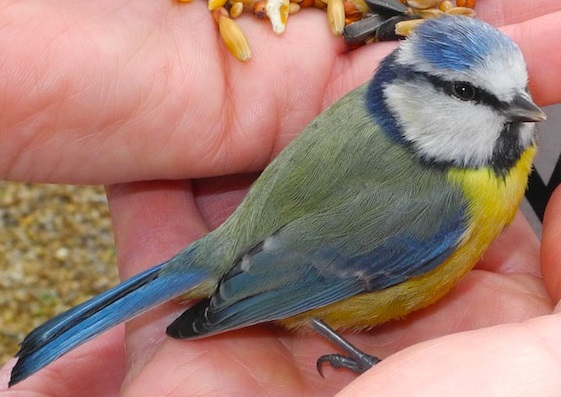 I don’t know about you all but I have been glued to Jan’s videos of the Blue Tit family in her Dad’s nest box. Well lets hear from Jan and she will tell you all about it!

A very exciting event happened in our house this weekend. The baby chicks decided it was time to leave their nest and learn how to fly! We were having a barbeque on Saturday evening outside and suddenly a baby chick tumbled around the corner of the house! We stayed back to let him listen for his Mum’s call so that he could find his way to the tree she was in. He was a bit confused for a little while but then he heard his Mum and he flapped his wings and managed to get over to the fence and then up into the tree. We went in to watch the other chicks on the camera and one by one they all took their turn to push themselves out and have a go at flying. The smallest chick was left until last and when it came to his turn he just wasn’t feeling brave enough. His Mum and Dad kept coming in and out to feed him and encourage him to come out but he didn’t want to go. So he snuggled up in his nest all by himself and stayed for one more night on his own.

In the morning his Mum and Dad came back to encourage him to come out again. And this time he built up the courage and finally jumped out of his nest. His Mum and Dad guided him over to the tree and he was reunited with the rest of the chicks! It was such an amazing event to watch and we are so delighted that the family all made it out together. We will miss watching them on the camera now! We will just have to wait until one of the chicks returns next spring to lay their own eggs in the nesting box.

So to have a look at all the new videos from over the long week-end, head over to Jan’s Bird Box with Nesting Blue Tits