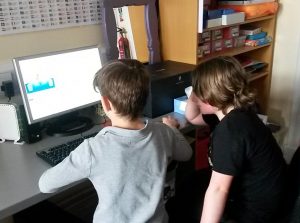 We are coming to the end of this school year and in the ICT Committee We have done a massive amount of work and we don’t plan to stop. The biggest difference which helped was that this year we held meetings every Tuesday and Thursday for half an hour. To put our efforts into perspective I will now list the majority of our achievements.

This year we had brought a concept that had been around for a while by creating The Golden Mouse which was sometimes awarded to the winners of competitions and other occasions.

Some of our competitions included the lego festive build competition and the Spring drawing competition.

We have also had much more success with the KidsBlog which until recently has been underused and not many people wanted to write material for the blog.

We also participated in a Quadblogging event for four weeks in which four schools each had a week as the main blog where the other schools would read and comment on the blog posted by the school. We got 6th class involved in commenting an writing blogs which everyone thoroughly enjoyed.

We have been teaching younger classes scratch coding and PowerPoint presentations. We look forward to continuing to promote ICT in the school next year.